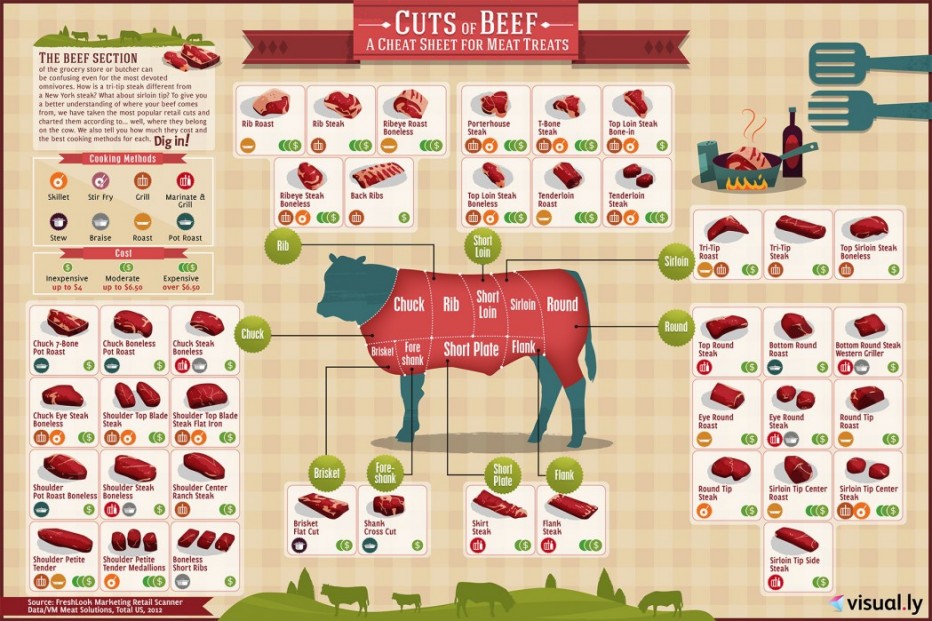 An easy-to-use guide to cuts of beef. The chart shows where each cut of meat comes from on the cow, how much it costs and how to best cook it. 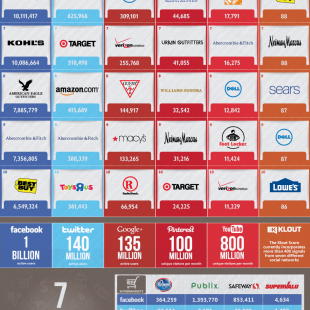 How are top U.S. brands incorporating social media into their marketing arsenal? American Eagle Outfitters and Abercrombie and Fitch, two major clothing retailers, use Facebook to promote sales and new seasonal clothing choices. Victoria’s Secret has created its own YouTube channel where Internet users can view supermodels sporting some of the chain’s world-famous bras, panties, lingerie, and beauty collections. It’s also using Pinterest, the most popular photo-sharing website on the Web today, to market and promote sexy lingerie as well as inspirational messages geared to women. Take a look at the awesome infografik to learn more about retail marketing and social media. Source: Major U.S. Brands and Social Media Infographic | Social Media Today 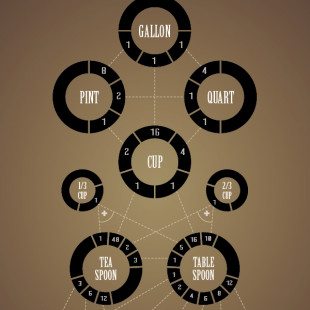 
Convert Measurements in the Kitchen with This Handy Infografik

Convert Measurements in the Kitchen with This Handy Infografik

How many cups is a pint or a quart or a gallon? How many teaspoons is each? When you're cooking and have to quickly convert kitchen measurements, a graphic chart like this is a great help. Sometimes you just don't have the right measuring tool for the recipe you're using. This "Common Cook's How-Many Guide to Kitchen Conversions" from graphic designer Shannon Lattin (who brought us an essential vitamins reference guide) shows you what to do for those quick conversions. At first glance, it probably seems more confusing than a simple liquid conversion chart. But when you look at it more closely and if you print it out for posting on your kitchen wall, it's pretty ingenious. The lines connect each measurement to their equivalent. (Note the + sign indicates an added measure to add. And, alas, there are no ounces here.) Source: Convert Measurements in the Kitchen with This Handy Infographic


Presidents' Pets: An Infographic History Of Animals In The White House

Presidents' Pets: An Infographic History Of Animals In The White House

Bo Obama has certainly received his share of media coverage, but he's actually just the latest in a long line of critters who’ve called the White House home. While 68 percent of our presidents have owned dogs, and 20 percent of them have had cats, other animals have also lived at 1600 Pennsylvania Avenue — like canaries, goats, horses and even cows. Exotic animals have also played a part in White House history, including President Theodore Roosevelt’s menagerie of lions, zebras and bears. President James Buchanan was gifted a herd of elephants from the King of Siam, but the pachyderms never roamed the South Lawn. There are, however, more than 70,000 bees currently taking up residence in a hive on the storied lawn. Source: Presidents' Pets: An Infographic History Of Animals In The White H ouse